The federal government has increasingly called upon the Defense Forces for assistance in the event of fires and floods. Tense between traditional battles and the war on climate change, there is a growing debate over the appropriate hardware (military hardware and equipment) they need.

Policy responses range from sensible to stupid to stupid. By taking them in reverse order.

The federal LNP canceled the $80 billion French submarines to go nuclear with $171 billion USUKA submarines (correct spelling, pronounced “you sucker”). Now in twenty (instead of ten) years, they will be technologically obsolete by the time they hit the water. This week’s announcement was for $10 billion to house nuclear submarines in one of three locations. Not consulted, everyone said they did not agree and did not want it.

Nuclear submarines are badly designed. Conventional and nuclear submarines use hybrid technology: a diesel or nuclear reactor powers an electric motor. You can turn off a diesel engine for “silent operation”, but a nuclear reactor has to run continuously or it melts: it has to pump in cooling water and dump the heat back into the ocean. The enemy can hear these pumps on his sonar; and hot water leaves a thermal plume that can be spotted by thermal imaging. China already has 60 submarines – you won’t approach the South China Sea until you’re spotted.

Submarines as a poor design choice for anything other than all-out aggression warfare. As I wrote in ‘Anzac Daze‘, they are purely an offensive weapon – hence the motto of submariners: “There are only two kinds of ships: submarines and targets”. That they play no role in local disasters is emphasized by Cathy Wilcox in the SMH.

Silly Ideas About Recruiting vs. Material

In support of his desire for a khaki election, the Prime Minister announced a proposal to increase military personnel from 60,000 to 80,000 over 20 years. It is highly unlikely. Defense has not met its recruiting targets since John Howard was Prime Minister. And it shows a misunderstanding of defense work, as if the failures were somehow due to a lack of personnel.

If Dutton’s saber clamoring for nuclear submarines is foolish, arguing for tanks on an island-continent seems reckless, especially as the invasion of Ukraine unfolds. The Minister of Defense forgets that the Australian Army and Navy have distinguished themselves much more a way of the battlefield that to this.

Consider INTERFET, a multinational non-UN peacemaking force, organized and led by Australia to deal with the humanitarian and security crisis in Timor Leste in 1999-2000. (Too bad the good work got smeared by the dirty shenanigans of the LNP to spy on them and swindle them out of oil reserves, and now continues the insult by chasing the whistleblower).

Think of the great work of the Navy in Darwin after the cyclone (when the Melbourne, moored at the quay, ensured the self-sufficiency of an orderly workforce – pun intended). Or their job of evacuating people during the black fires of summer. In fires, floods and cyclones, whenever we need high levels of organization, line training and following orders, we call on the military.

The failure is not in the personnel, but in the material that is offered for their use.

A sensible idea for civil protection

This week, a well-reasoned suggestion came from retired Admiral Chris Barrie, a key member of Australia’s Climate Security Leaders Group which released the “Missing in Action” report last year. In an ABC interview, RN Barrie argued that it was not a good use of the military to be increasingly called out on climate change issues, but rather that the military should focus on its traditional defense role, while a “civil defense force” could be established to address climate change issues.

Others have advocated for such an organization to be expanded to help with social issues such as health, aged care and the NDIS. In private, I even heard that it was a form of “national service”, training young people, like Switzerland and Israel. Barrie doesn’t go that far, but a Peace Corps, similar to that established by US President John F. Kennedy, has its attractions, as I explained in the ToT article “Piece Corps” (a lamentable game of words).

However, we badly need a “standing army” to deal with the problems of climate change and focus our attention on the security of our region. Whether conventional or ‘civilian’, we have to ask ourselves ‘what equipment will they need?’ “.

First, let’s exclude submarines, nuclear or not. And tanks. The ever-reliable “Bushmaster” troop carrier, partly designed and built entirely in South Australia, and considered far superior to the Hummer in Afghanistan, is inappropriate and useless on our vast continent. Likewise, the top gun type jets, which have not been used in combat for 50 years; unlikely in the next 50 years.

Two pieces of equipment are essential in the fight against climate change: helicopters and landing craft.

We need to design (and build) a multipurpose helicopter. In bushfires, it’s a water bomber. In the event of a flood, he delivers food and supplies. Either way, it would help with evacuations. It should be tall but nimble, capable of being a small personnel carrier or having a large water payload. It might even help in a traditional war on our coastline.

It would be a perfect complement to the C-130 Hercules troop and equipment carriers used so successfully in bushfires by the Rural Fire Service. In the vein of “turning swords into plowshares,” I advocate that we turn bombers into water bombers.

Given that 85% of Australians live within 50km of the edge of our continent, we need warships that can both defend this prolonged occupation, but what’s more, in times of flood and fire , can evacuate them. The successful design model was the evacuation of Mallacoota during the black summer bushfires. 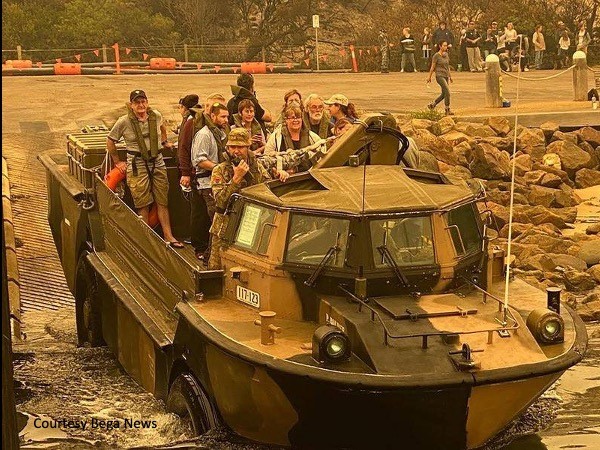 I expect, and hope, that the Department of Defense will be forced into transparency by the new federal government (with new Secretary of Defense Brendan O’Connor, who has already foreshadowed a civilian disaster management agency natural). If they want the hugely expensive equipment they are now demanding, they need to explain how it helps confront our enemies, who they are, and how the multi-billion dollar investment will be used, immediately, not 20 years from now. . I suspect the enemy of climate change will figure prominently

I won’t hold my breath for that to happen, but it would be nice to design and build helicopters and landing craft in Australia to meet the challenge.

Tone Wheeler is Principal Architect at Environa Studio, Adjunct Professor at UNSW and President of the Australian Architecture Association. The opinions expressed here are solely those of the author and are not owned or endorsed by A+D, the AAA, or UNSW. Tone does not read Instagram, Facebook, Twitter or Linked In. Sanity is preserved by only reading and responding to comments addressed to [email protected]