There is much talk of a “world-class renovation” of the Sabarmati Ashram in Ahmedabad these days. Gandhi’s building philosophy, however, points in a totally different direction. Interestingly, there is relatively little in the Gandhi archives to vouch for authentic Gandhi architecture. If we read the domestic space of Bapu Kuti, the Wardha hut which Gandhi moved into in 1937 while engaged in village improvement works, certain clues unfold. This structure was designed by his disciple Madeleine Slade (Mirabehn) in accordance with medical advice regarding Gandhi’s persistent ill health and his need for a “quieter place”. While Slade relied on Gandhi’s need for intimacy to imagine an adequate inner world for him, she did not think in terms of the continuity of Bapu Kuti’s existence over a period of time. After all, the hut was made of mud and acacia. From its creation, Bapu Kuti was to remain exposed to the depredations of time and decay.

A house is a kind of guarantee against instability. It is a space where the processes of caring for oneself, or the processes of making and remaking oneself in order to stay alive, can take place without interruption. The house is a secure space for the social reproduction of work. With its impermanent walls of mud and acacia, Bapu Kuti was certainly not such a safe place to traverse discontinuity and impermanence. What exactly was Bapu Kuti then, if not a house in the conventional sense?

Consider Gandhi’s observations of village improvement works in the mid-1930s, closer to the time he settled in Segaon. In 1935, he recommended a grass shack as a home for a village improvement worker in Gujarat. The hut had to be built within the perimeter of the village, and not at a distance from it because it was important that the improvement workers lived permanently among the working villagers. In his “letter to a village worker”, Gandhi writes: “A villager absorbed in his [sic] work has no time for friendly visits. You have to try to imitate him [sic]. You must therefore make it a rule not to move beyond a radius of ten miles… It is impossible to step into the shoes of the villagers until you live in the midst of them all twenty-four hours for an uninterrupted period.

Gandhi’s prose is revealing. The improvement worker’s task of imitating “the villager” implied that no less than the whole of his day, even the time spent in the household for personal care and self-preservation, should be devoted to the productive labor of village improvement works. Far from being a safe space for the social reproduction of labor, the improvement worker’s house was itself a place of labor. Moreover, not only was the time for the reproduction of labor power, or more precisely the time spent in the house recuperating and resting from work, strained, but the house itself, due to its very fragile material constitution, was to remain a cause of physical fatigue.

To understand this, one can draw attention to Gandhi’s continuous ennoblement of suffering and tension in a religious sense, through his pursuit of varnashramadharma. As we know, in Gandhi’s imagination, it was often the weapons carrying the warrior or Kshatriya who have willfully suffered through acts of self-limitation through self-sacrifice. To commit to staying in the place of fragility and transience, or more precisely, to commit to staying in the space of tension and discontinuity, was to be a Kshatriya. The house, from this point of view, was not so much the space of oneself.care as it was the space of self-sacrifice. In fact, the fragile material constitution of the house, if not the incessant labor nature of inhabiting, was merely a mere outward manifestation of its occupant’s inward inclination to manifest as a Kshatriya.

However, there is a paradox in this reading. As soon as we start tying the house of improvement worker to self-fortune, Gandhi starts pulling us in the exact opposite direction, that is, towards the other. The task in 1935 was not to assert oneself as a Kshatriya, but to imitate a villager. This villager certainly remained undifferentiated and hazy in Gandhi’s thought, but lived a life of hard work, devoid of the resources to adequately reproduce. The village improvement worker’s house was then not a form of self-expression. On the contrary, a fragile house made intelligible the villagers’ inability to make and rebuild themselves effectively on a daily basis. The house was a workspace.

Bapu Kuti was a rather strange place. The Sewagram building was filled with a veranda, a living room, a storage room, toilets and even a massage room. The living room, for its part, was divided into three sections: a central seating area for Gandhi and Kasturba, flanked by subsidiary spaces for Mahadev Desai and visitors on either side. While it was a house re-proportioned by Madeleine Slade to meet Gandhi’s needs, “a true cottage for Bapu”, its material constitution and spatial allocations also draw attention to its instability and inadequacy. as a private space. We can therefore argue that Bapu Kuti was not the space of the self, but the space of the villagers who did not have a secure place of social reproduction. In other words, Bapu Kuti was not Gandhi’s ‘home’, as it might have made him homeless. 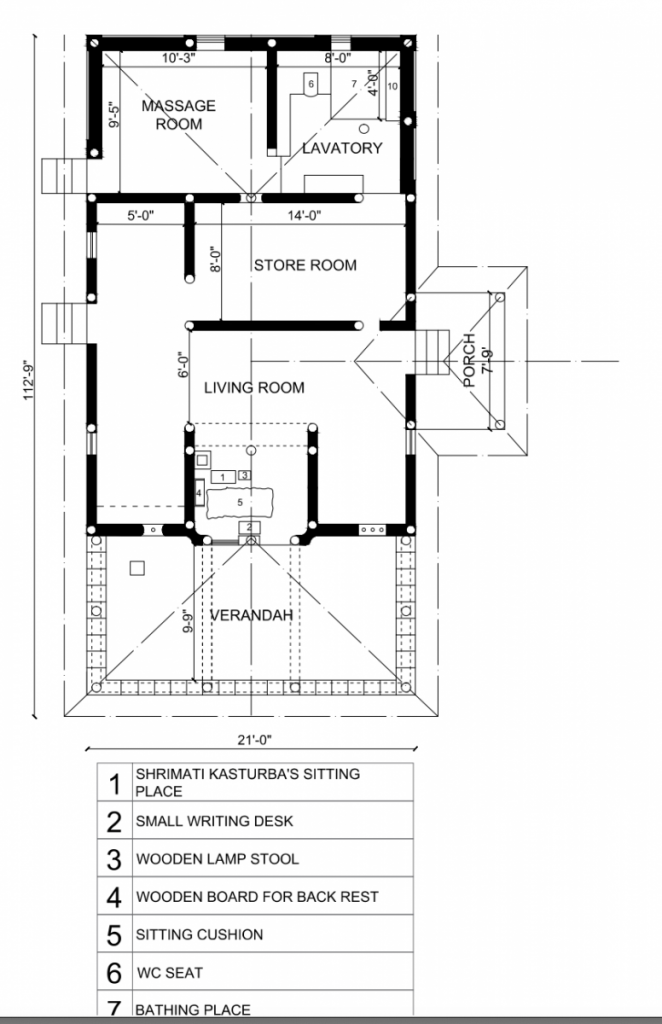 If one trusts the architecture of Bapu Kuti and Gandhi’s injunctions for village improvement works, the task of conserving or reproducing Gandhian architecture in the present must, of necessity, extend beyond beyond an architecture of permanence for Gandhi’s own ashrams and encompass those who are deprived of them. resources to reproduce adequately. As we know all too clearly from the exodus of workers from cities caused by the pandemic, these people are never too far from us. The conditions of the thousands of construction workers working on supposedly world-class construction sites in India, without the benefit of shelter or a quiet place, are not too different from those of the villagers of India. Gandhi’s imagination in 1935. What does a Sabarmati ashram dedicated to the construction workers of Ahmedabad look like?

Venugopal Maddipati is an architectural historian who teaches at the School of Design at Ambedkar University in New Delhi. He is the author of Gandhi and architecture: time for cheap housing.