the ‘tower of the sun’ celebrates the sunrise over the coast

new york and beijing based studio OPEN architecture unveils the design of its ‘sun tower’ as construction begins in yantai. emerging along the shores of the yellow sea, the work will rise like a beacon and house a ground floor, a semi-outdoor theatre, a winding exhibition space and a library in the sky. these many functions will all be housed under a unique semi-outdoor ‘phenomenon space’ at the summit, which invites visitors to enjoy stunning views of the sea and mountain scenery all year round.

with its new landmark on the coast, the design team recalls the history of yantai, which means “beacon tower”, and its ming dynasty watchtowers built to warn against attacks on the coastline. OPEN presents its concrete solar tower as ‘a more purposeful structure, something that would evoke ancient nature worship rituals while providing much-needed cultural facilities in the newly urbanized neighborhood.’ with its nod to history, the design is illuminated by the beautiful sunrise views over the Yellow Sea, for which the city is known.

the building appears as a cross section
images courtesy of OPEN | @open.architecture

OPEN architecture’s “sun tower” (see more here) takes the form of a large curved volume, its geometry directly informed by meticulous studies of the sun. the structure involves a truncated cone, appearing to have been sliced ​​through by beams of light to reveal its section to the sea. rising fifty meters (164 ft), the sun tower sits on a gently sloping plaza. the building is a composite shell structure, the complex design, developed in close collaboration with engineering firm arup, will be constructed in two layers of inclined concrete shells, connected and braced by slabs and horizontal ramps.

opening out towards the horizon, the concave inner shell of the solar tower acts as a sound collector to absorb and amplify the sounds of the sea. the smaller upside-down upper shell houses the light library and “space phenomena” with stunning views of the ocean and sky above. a central oculus in the ceiling of the phenomenon space allows rainwater to enter and fill a small pool below in the summer. in winter the pool will be dry and used as a fireplace. 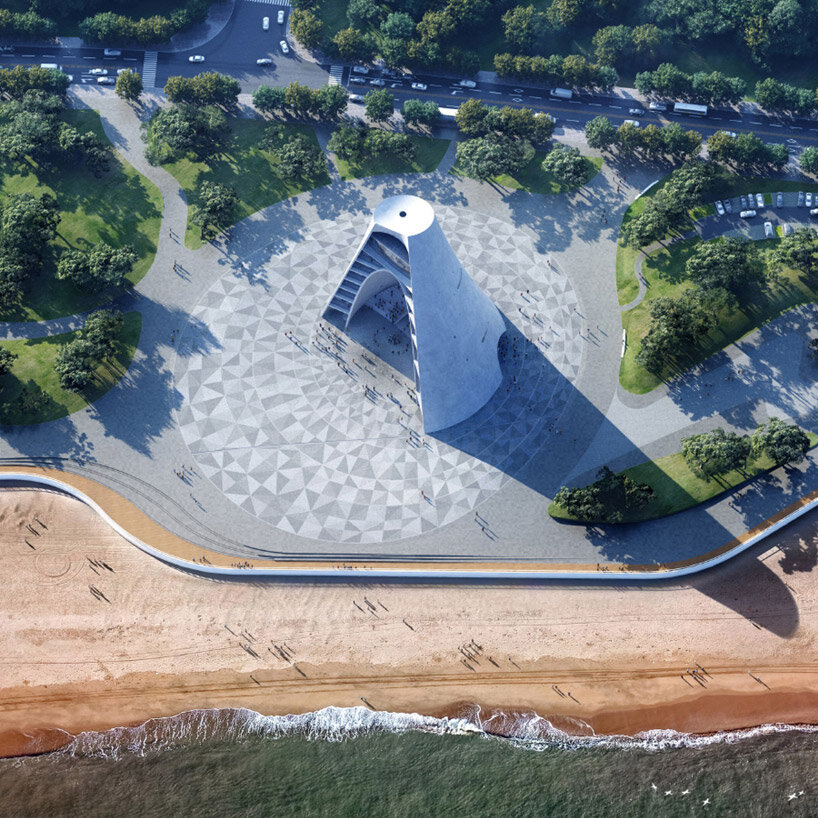 bird’s eye view of the tower of the sun

li hu + huang wenjing, founding partners of open comment: ‘today it’s so important to find ways to connect and embrace nature, we wanted to keep that central to the solar tower concept and respect the power of the surrounding landscape. when we came up with the design, we wanted to reference ancient human rituals, honoring the sun, moon and stars, and providing space for reflection and contemplation.

on the other hand, we also wanted to make sure that the building had an authentic purpose and function, something that would benefit the citizens of yantai rather than just a madness on the beach. create spaces that juxtapose incredible ocean views with cutting-edge digital exhibits that explore nature.’ 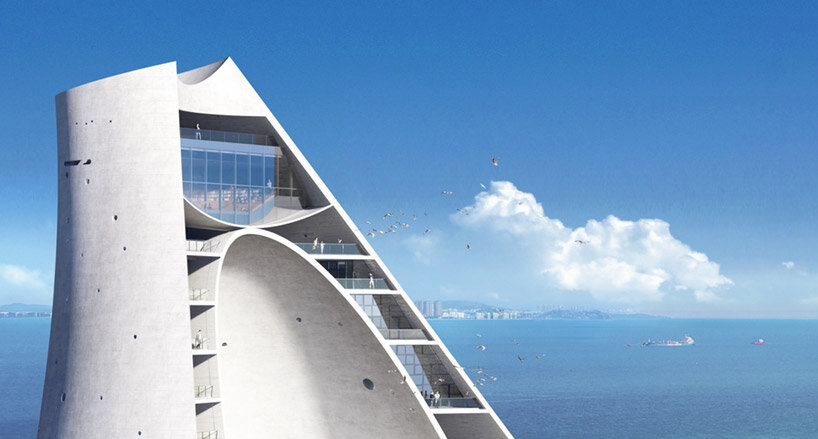 view of the library and belvederes

The “time master” of the OPEN architecture

in the plaza on the ground floor of the solar tower, the OPEN architecture incorporates a shallow pool that completes the circular footprint of the work. with misting devices and gushing fountains, the area has a specially designed water channel that runs through the plaza. the team describes this channel as a “rule of time”, as it marks a straight line that the tower’s shadow will follow on the day of the equinox.

a series of elliptical rings are placed in the pavement pattern – the intersections between the rings and the water channel mark the footprint of the building’s shadow at specific times on the day of the equinox. at one of the outer rings, a series of fountains have been designed to celebrate the 24 solar terms of the traditional Chinese calendar. on normal days they are synchronized with high and low tides. these carefully planned water features add to the lively feel, while reflecting the city’s long history of ocean culture, rare in china. 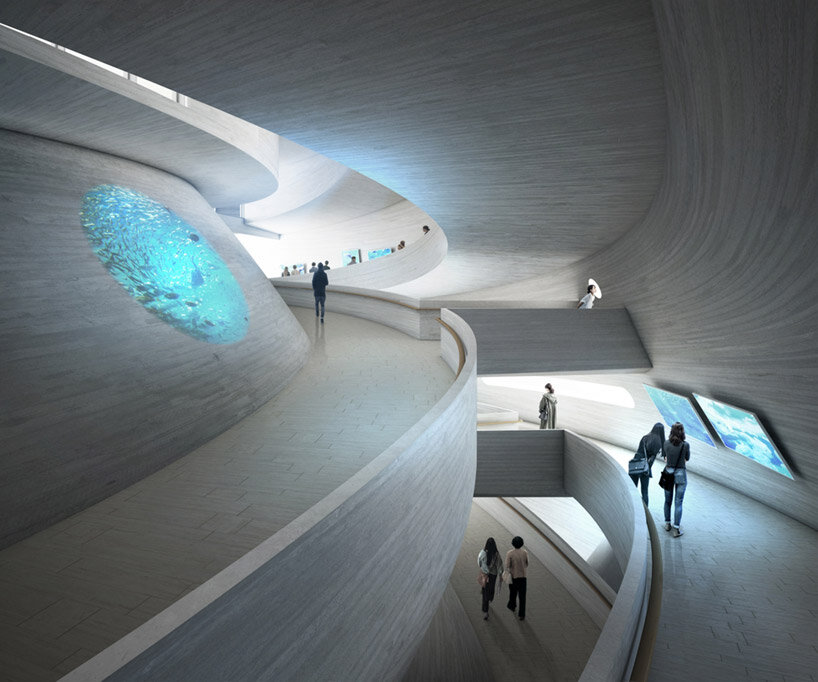 in the first design phase, in collaboration with the French company dUCKS scéno (see more here), OPEN designed the exhibition spaces inside the building with a focus on digital exhibitions and big data technologies, while simultaneously being a driving force for the long-term growth of the new city.

aric chen, the current general and artistic director of het nieuwe instituut in rotterdam who, in his previous role as director of the D&I curatorial laboratory at tongji university in shanghai, consulted the project from a curatorial perspective, working with open to develop this idea of ​​a digital museum that would link the digital to phenomenology.

aric chen comments: ‘OPEN has a remarkable ability to take on an architectural mission and give it meaning and purpose; in their hands, form follows content. from educational institutions to cultural projects across China, they have shown time and time again how architectural innovation and social innovation go hand in hand.’