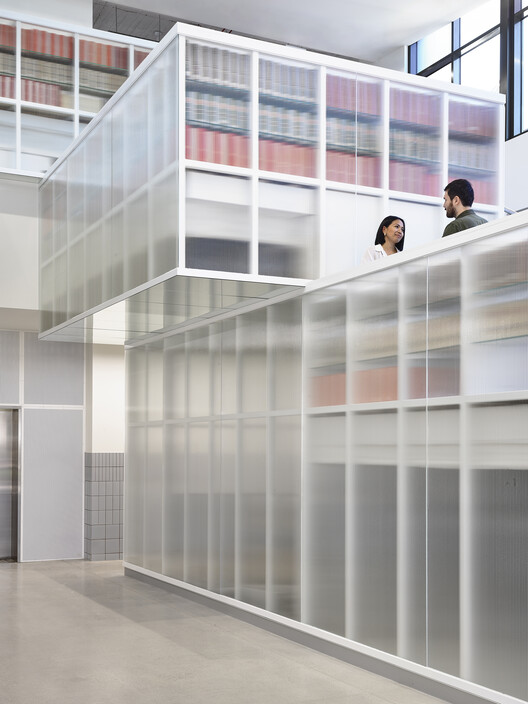 Text description provided by the architects. The typology of libraries has changed enormously over the past 5 years. We worked closely with the library’s executive group to create an interior that supported a conceptual shift from ‘collection’ to ‘connection’. This project basically involved redesigning an existing shell to create a new library for the community of La Trobe University, Bendigo.

Spread over three levels, the scope included an entrance gallery, consultation rooms, ASK La Trobe information modules, a postgraduate lounge, a conference room and an integrated exhibition of the flagship book collection ‘Sandhurst (The main collection of books can be found elsewhere in the building. The client was keen to challenge the concept of a traditional library. We embraced the possibility of a new typology with an emphasis on facilitating Community “connection”, rather than mere spaces for the “collection” of books.

Working in an existing shell is still very difficult. The project budget was extremely limited for a development of this nature and of this magnitude, and a clear hierarchy of investments had to be established in order to deliver the functional aspects of the project without harming the overall concept. Rather than seeing this as a problem, we chose to see it as an opportunity to leave parts of the interior undefined and full of possibilities, suggesting a future of optimism.

Our aesthetic approach was to leave key elements such as the existing ceiling infrastructure and the vermiculite clad steel structure intact and unadorned. The new architectural interventions were treated as installations clearly distinguishable from the hull, with autonomous objects separated from the ceiling and floating from the ground. Cascading pods adorn the grand staircase from the main entrance, formed of semi-transparent glass structures that house the secure book collection. Their fuzzy thorns contribute to the only colors of the space, reimagining them as artifacts surrounding the central staircase that connects the levels. The arrangements of clear glass, mirror, and reed create a kaleidoscope of reflection and transparency on all levels, blurring the figures of the occupants as they weave their way through the interior. It seemed appropriate to us that a newly defined library space could literally be a reflection of itself.