Many parts of India are currently reeling from a scorching heatwave with temperatures exceeding 50C in several cities and towns. While one might take the easy way out by blaming climate change, the real reason isn’t hard to see – just take a look at the skyline of concrete monstrosities and the topography of hot boxes that house millions of people, to find out the source. of the problem.

Modern architecture in India is heavily influenced by Western standards and styles and totally unsuited to the local climate. Ironically, modern architecture replaced traditional architectural styles, which were more responsive and sensitive to microclimatic conditions, and used local materials such as earth, clay tiles and wood, as well as design practices that focused on ventilation, breeze circulation and prevention of heat build-up. -at the top.

Sadly, more than 90% of Indian buildings continue to be built in the Western way using cement, sand and steel, while relying on energy-intensive cooling systems to maintain the internal comfort of occupants in concrete structures.

Concrete absorbs and retains heat during the day and releases it at night, creating oven-like conditions inside the building. Between concrete walls, roofs and sidewalks through hundreds of tightly packed buildings in cities that cannot cool down even after sunset, this leads to what is commonly known as the island effect urban heat. Air conditioning systems are primarily used to keep interiors cool, with hot air released from cooling equipment adding to heat buildup – a vicious cycle that dramatically increases electricity demand and overloads power plants.

With jobs, education and livelihoods concentrated in urban areas, the demand for housing has increased to gigantic proportions, straining the availability and use of land. Free-standing homes are increasingly being replaced by multi-storey buildings that prioritize salable space over comfort. However, even the residential houses being built are modeled on Western architecture, with the resulting flat-roofed concrete structures unable to provide the natural comforts of a traditionally built house.

India is a culturally diverse country with a varied topography, with both characteristics reflected in the dwellings. As one travels up and down India, the geography changes and so does the design of the buildings. Traditional architecture still survives in many parts of India, but not so much in urban areas.

Houses built in traditional styles respect the vernacular and cultural character of the region and respond to the local climate and way of life. Although designs may vary from region to region, some of the common features include thick walls, sloping tiled roofs, high ceilings, and interior courtyards that open to the sky.

For example, the mansions, known as havelis in the western state of Rajasthan are constructed with locally available materials such as sandstone, baked bricks, earth, marble and timber to provide a climate sensitive building. Interior courtyards allow natural light and ventilation; wooden ceilings and marble floors keep the interiors cool; and intricately carved lattice windows, sunshades, and balconies reduce heat gain inside the building in the region’s hot, dry climate.

To the south, in the coastal state of Tamil Nadu, traditional architecture can vary by community and region, with examples ranging from clusters of dwellings to huge free-standing mansions. Common building materials include mud mortar, lime plaster, terracotta tiles and red clay floor tiles, while design features such as thick brick walls, wide verandas and inner courtyards keep the interiors cool and comfortable.

An ancestral home of the Nattukottai Chettiars – a trading community in Tamil Nadu (Image Source: Dakshinachitra)

Kerala is known for its distinct architecture, despite its proximity to Tamil Nadu, and is one of the few regions in India where widespread examples of its traditional architecture can still be seen. While most modern homes are concrete and steel structures, traditional design elements and materials have been adapted into the design of the building. For example, pitched roofs allow water runoff during rains, while clay roof tiles keep houses cool during hot summers. High ceilings and central courtyards are often incorporated to keep interiors well ventilated and cool. Laterite rock, which is readily available in the region, is commonly used to build walls, helping to keep interiors cool in hot weather. Similarly, wood is a widely used building material in Kerala. 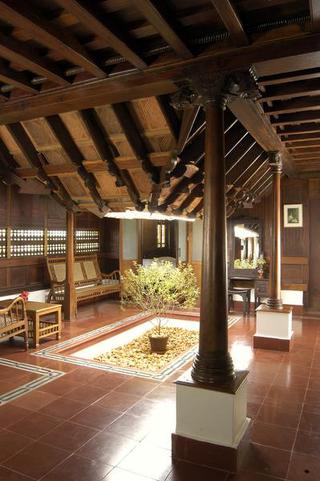 Central courtyards are frequently incorporated into traditional Kerala houses to keep the interiors well-ventilated and cool (Image source: The Hindu)

Although traditional architecture in its entirety may not be economically viable in the modern context, especially for multi-storey structures, the sustainable way forward would be to adapt certain design features and techniques specific to vernacular practices, as well as to use locally sourced building materials to construct buildings that can better respond to the local environment. Using locally available building materials also has the added benefit of reducing emissions in construction projects, thereby contributing to climate goals.