A distinctive bespoke clay facade wraps the interior of The Eaves, a new three-storey shopping precinct in Brisbane’s West Village, designed by bureau^proberts.

The project sees built form and landscape intertwine with each other, with the perimeter of the building as carefully considered as the structure itself.

“We wanted The Eaves to contribute to this vibrant streetscape and play an important role as a civic connector.”

Office^proberts partner and design director for the project, Kelly Geldard, says the practice has worked to create civic benefit for adjacent green spaces while making new connections to the surrounding neighborhood.

“The form of the building has been shaped by connections and views to the bordering streets and to the significant heritage buildings within the compound. We have created a series of connected common spaces that provide different settings for people to gather at any time of the day.”

A warm wooden structure that mirrors the structural grid of heritage brick buildings serves as the entrance to the site and creates a permeable urban walkway for al fresco dining and drinking. The wooden structure reflects the heritage structures and acts as a trellis for the vegetation and as the vegetation matures it will create a green and seamless connection from the street to the public square beyond.

The clay facade channels the red brick masonry of the ice cream factory and forms the backdrop to the public square. The negative spaces, the size of common bricks, inside the textural screen are created through the bespoke clay units which are supported by a steel frame.

The commercial and hotel offer of the district opens onto the landscaped public square, where a clump of fig trees forms a natural meeting place. A sweeping curve in the facade of the building welcomes the canopy of trees in a deliberate nod to the importance of nature.

“’The Eaves’ has become a working title for us and reflects a Queensland conservatory, with the ground retail space spilling out onto the terrace and green spaces,” says Proberts.

“This idea of ​​creating a subtropical conservatory led our work to amplify the building’s role as an important part of the fabric of the West End.”

Built for Sekisui House, the developer was brilliant in their assessment of the building. 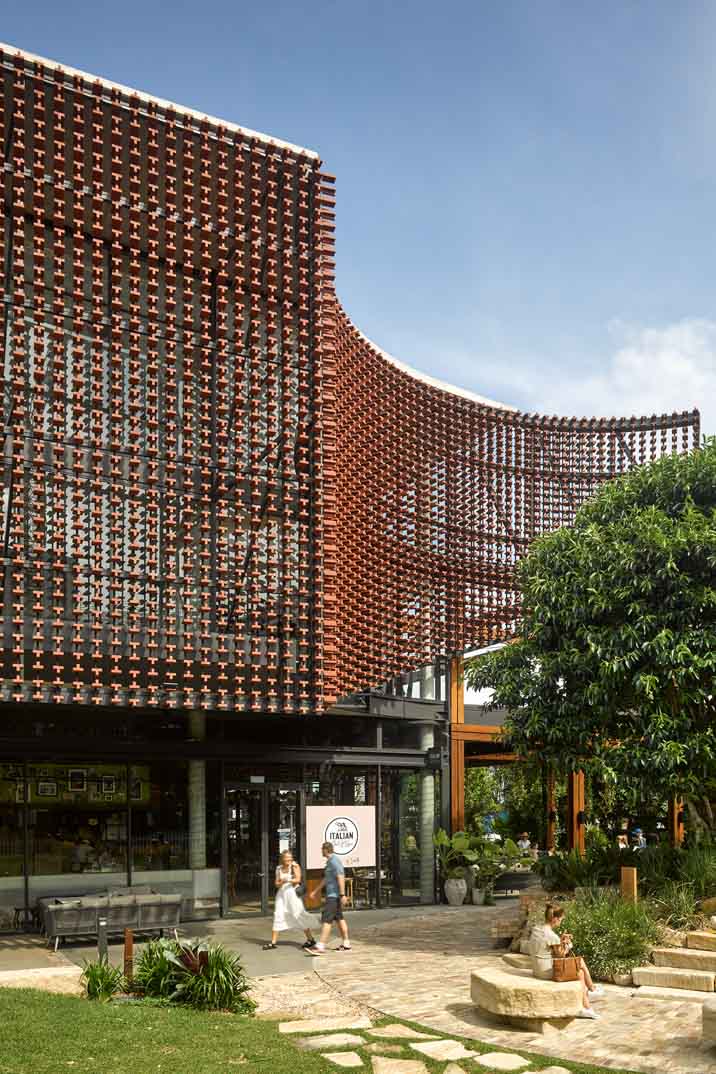 “”The Eaves” is a bespoke building which, in its material simplicity, generosity to the surrounding landscape and homage to the site’s built and social heritage, perfectly embodies our goal of creating communities that improve with time and last for generations,” a statement read.

The project was recently awarded the Australian Institute of Architects 2022 Brisbane Regional Architecture Awards. The jury says the project could be “considered the connective tissue” of West Village.

Learn more about the project here.