The Hill Standard apartments are located in the western part of the site, with the Veil building in the distance. (Michael Schwartz pictures)

To some, the two mostly black, square buildings that dominate the city sidewalk in the 4900 block of Forest Hill Avenue might be better placed aboard a deep-sea container ship than amid bungalows, Cape Cods and colonial revival homes in the quiet Westover Hills neighborhood.

The Veil Brewing Co. and its next-door neighbor, the Hill Standard apartment building that houses a Stella’s Market, a Blanchard’s coffee shop, and a Charm School Study Hall ice cream and yogurt parlour, are successful place-makers and striking in this aging trade. suburban section.

Until recently, Forest Hill Avenue lacked anything resembling distinctive architecture. Sure, the Locker Room Restaurant and Billiard Room across the street at 5035 Forest Hill have raw charm. And some will miss The Forest, a greasy spoon whose interior was adorned with paraphernalia glorifying the Pirates, Penguins and Pittsburgh Steelers; it was resurrected as Riverside Tavern. But the Veil and Hill Standard represents unapologetic nods to modernism that infuse Westover Hills with unexpected courage. The complex was designed by the architectural firm of Richmond Fultz & Singh. 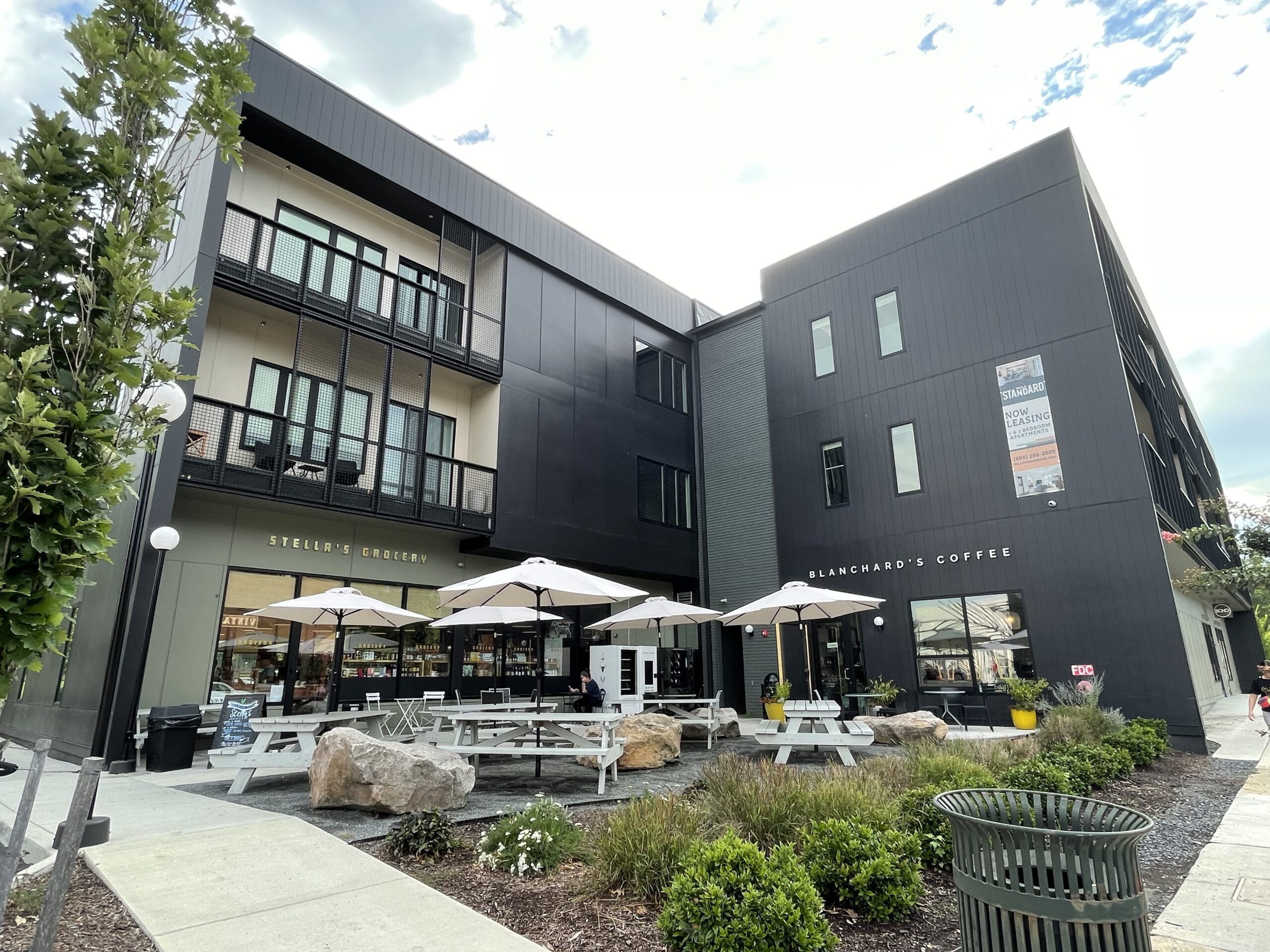 Stella’s Market and Blanchard’s Coffee are two of the ground floor tenants of the building.

First of all, Richmond has few buildings with aggressive black exteriors. We generally favor red brick, buff sandstone or a derivative thereof. But there is an inherent drama and intentionality to dark walls that exude confidence from the architect, clients and tenants. Add disciplined design to the mix and fit for building purpose and the results can be striking.

The Veil is the smallest of the companion buildings. Each of its two stories is punctuated by large windows that keep the minimalist structure from seeming oppressive. Customers enter the large tasting room (which also offers Y Tu Mama cuisine) from the west end of the building and are faced with various gates. There are 27 white glass globe-shaped light fixtures lined up on the north wall. Black rectangular tables are arranged in a grid that aligns with the directional pull of the space. Even the dramatic menu board, electronically projected above the bar, is so well designed that it forms a grid.

A steep internal metal staircase leads to the second floor. A reward for the climb is to see the mural on the south wall of the tasting room. Fashioned in red neon, it depicts a huge gila monster approaching the underworld. Tim Skirven was the artist (he is also known for his tattoo work). The piece injects the single color to the entire company. 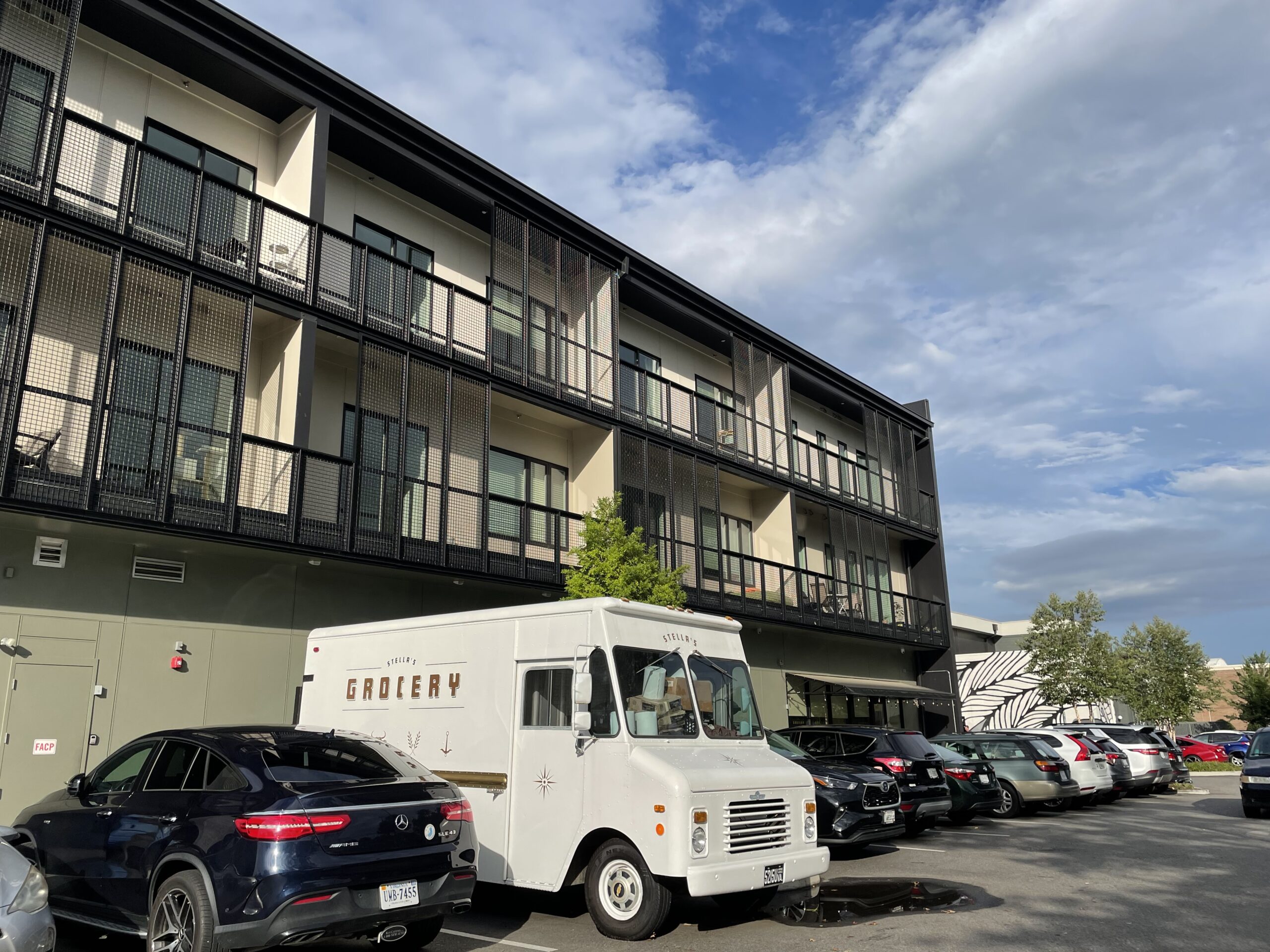 The rear side of the apartment building also features the wire mesh grilles.

From this large space on the second floor, a large glass door opens at the western end of the room to an enclosed porch. “It’s like a treehouse,” joked a patron seated at a sleek black table nearby. The large transparent windows on the remaining three walls open to visually connect with the environment. The rear window frames the manicured playground near the nearby Westover Hills Elementary School and the mature shade trees that frame it. Since the building is tight against the city sidewalk, the views towards Forest Hill Avenue containing mid-20th century commercial buildings make them seem more dignified than before the arrival of the two land yachts. Even the large aluminum clock on the wall of the red brick Westover Provisions building across Forest Hill is striking.

On a recent rainy afternoon I visited The Veil with friends. This closed porch was occupied by a group of 12 people. It was a close-knit family of three generations who felt very much at home. Toys were scattered around. A septuagenarian great-uncle was on the ground playing with a rambunctious 3-year-old while, nearby, the boy’s blond mother nursed his brother. Other patrons adjusted their movements and drank good-naturedly. There was something normal and reassuring about attending a family reunion after months of the pandemic.

The Hill Standard Apartments, located immediately west of the Veil, is a three-story L-shaped building. Its massing is broken by continuous balconies on the north and south facades which communicate with the accommodations on the two upper floors. The austerity of this building is broken by a metal mesh that creates another grid. Units are advertised as ranging from 800 to 1,300 square feet. 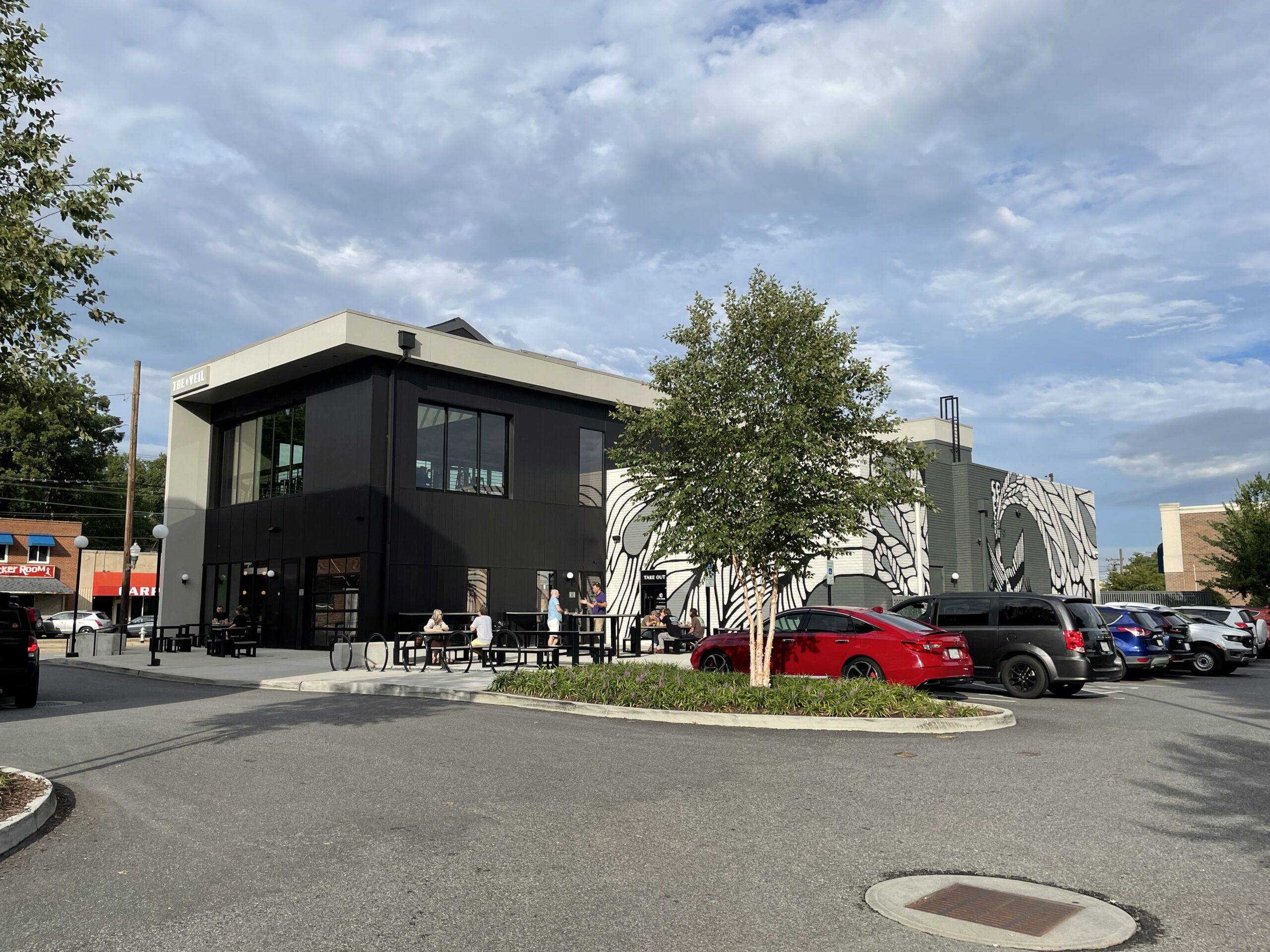 The Veil building is adorned with a mural.

Surface parking for residents and retail customers is at the rear of both buildings. This is important to the overall success of the resort design. Other buildings along this stretch of Forest Hill Avenue are set back from the city sidewalk behind parking spaces. This creates an overall fractured streetscape. At the nearby and busy intersection of Westover Hills Boulevard and Forest Hill Avenue, two dueling national pharmacies, a gas station, and a former dry cleaner anchor the four corners, all set back behind the asphalt. This reverence for the automobile is understandable since the neighborhood was not developed as a tram suburb but as an automobile district. In fact, the Boulevard Bridge (whose toll was once 5 cents) was built in 1925 by private developers who wanted to link their upscale Southside development to the West End. Now the Beginners, the Veil and the Hill Standard are as urban as they are urban. In addition to hiding vehicles, pedestrian activity on the city sidewalk is encouraged by an outdoor seating area in front of Stella and Blanchard’s handsome operations.

This patio, however, is the only space in the entire complex where painfully precise attention to design has not materialized. Clumsy wooden picnic tables, like those found in a park, have been painted white, but they’re too big for the intimate outdoor space and delicate landscaping. Outside nearby, the disorderly arrangement of mismatched chairs creates visual confusion at the entrances to Stella’s and Blanchard’s.

Overall, the Veil and Hill Standard architectural spectacle is so tight that it’s time to put away the opening act at some of the front doors.