Germany is a country of ancient forests, beautiful rivers, and historic works of art and buildings. Acid rain is dangerous gases such as carbon dioxide, sulfur dioxide, and nitrogen oxide combined with water in clouds to create acid rain. When it comes to the problem of acid rain, Germany is its worst enemy. The main sources of acid rain are smoke from factories and cars. Factories burn fossil fuels like natural gas, coal and oil. This adds to acid rain through automotive emissions. Toxic smoke from manufacturing plants is carried by air currents to other locations before falling to earth as acid rain. Germany shares its borders with many other countries. With other countries involved, it is also a more difficult problem to solve. For example, air currents bring chemical-laden smoke from UK coal-fired plants to Germany. The chemicals fall to earth in Germany as acid rain. Over the past forty years, acid rain has wreaked havoc on these landmarks. Acid rain has destroyed nearly half of the Black Forest in southwestern Germany. It damaged the soil and the trees growing there. Many hectares of diseased trees are at risk of death. This is the main concern going forward.

In this project, special balloons are precisely designed to store acid rain from the environment. the designed sponge contains an internal helium tank which helps to float in the sky. Each module of this mobile system stores a significant quantity of acid rain which is calculated according to the capacity of each balloon. The internal system of the sponge is a suction system directed to the pipes inside. Each sponge is marked with numbers, which, after filling their capacity, will be directed to the main slot in which the upper part of the building is located. After this process, the acid rain is directed to the main part of the pipe which is designed as a building structure. It is designed as human ribs which widened all the side parts of the building. Then the acid rain enters the refinery and was designed based on the research. Although this system has not been built, it is possible to create it perfectly. We know that pure water has a pH of 7.0; however, natural, unpolluted rainwater has a pH of around 5.6 acidic. The acidity of rainwater comes from the natural presence of three substances CO2, NO and SO2 present in the troposphere, the lowest layer of the atmosphere. This system purifies acid rain and produces clean water for agriculture and the environment in which the interior spaces of the skyscraper were designed. Water received from acid rain is stored in a spring and is transferred to a wet scrubber by an electronic pump. Air is blown from below, and as a result of this process, carbon dioxide and air are emitted from above, and pure water is released from another separate path. Air and carbon dioxide are collected in the stripper and a combination of water and amine flows through it. The following steps make it possible to obtain clean air in which we can use it for the environment. After that, the aqueous solvent, amine and rich carbon dioxide come out of the tank together and are transferred to the absorption tower. The final stage is where carbon dioxide is released and this pollutant is sent deep into the earth in porous parts and stored. Clean air and water return to the system for use in the interior skyscraper. 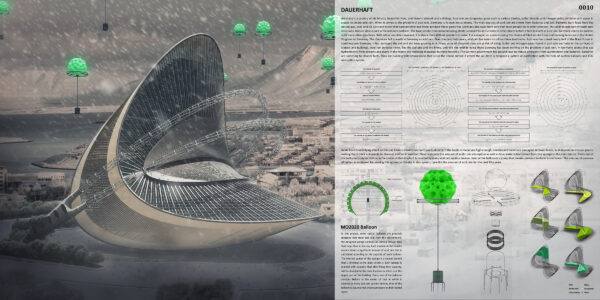 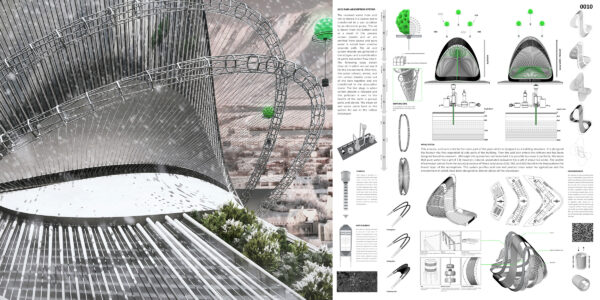